A pick from results

LightningChart .NET is up to
x3000
times faster
than any other charting control in the market.

There are only a few truly high-performance charting add-ons for .NET. Based on the manufacturers’ claims as well as performance results in official websites, LightningChart and Competitor are the top 2 charting libraries.

It was clear that LightningChart was faster. Today, Competitor is still claiming they have the “World’s fastest WPF charts”, which according to running the Competitor’s demos, and suspected and verified by the customers, doesn’t seem true at all. So, to clarify this confusion for the users and customers, we were practically forced to make a new comparison to show users a real proof of which chart is The Fastest In The World.

This test has been made as a stress test most demanding line charts applications, which are progressing real-time charts, such as medical ECG, EEG, ExG, telemetry, vibration monitoring and instrumentation applications.

In LightningChart® .NET v.10.1.1 a new, super-fast, line series was introduced, called SampleDataBlockSeries. The data is stored as memory blocks, which disposes old data and appends new data, easier on memory and CPU.

According to the Competitor’s documentation and examples, the FastLineRenderableSeries, with Visual Xccelerator engine with Impossible mode enabled is the most performant way to render progressing line charts with the resampling mode enabled.

Therefore, Visual Xccelerator rendering engine was enabled (which should use DirectX) + Impossible Mode ON, and all tips (for optimizing application) from Competitor’s developers have been followed. However, we did one exception regarding ResamplingMode.

The following test compares these two high-performance line series in practical tests. This scientific data visualization test was performed with a standalone SampleDataBlockSeries demo application made by the LightningChart team. Copyright LightningChart Ltd, 2022, All rights reserved. 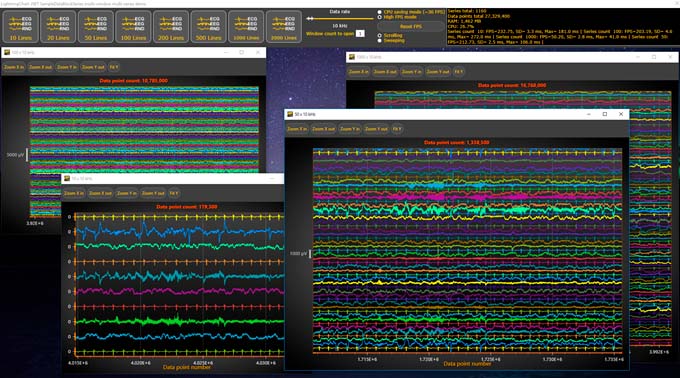 The application consists of a header bar and the test application allows opening dozens of chart windows at once. The data rate is adjustable, starting from 1000 Hz (1000 data points/sec) for each series. Each window can be opened with a preferred series count between 10 – 2000.

The data read from a .CSV file consisted of real ECG, EEG, and then random data every 3rd series.

In the following image, the main focus is only based on the scrolling mode, as the Competitor does not have a Sweeping mode built-in feature (as LightningChart does). 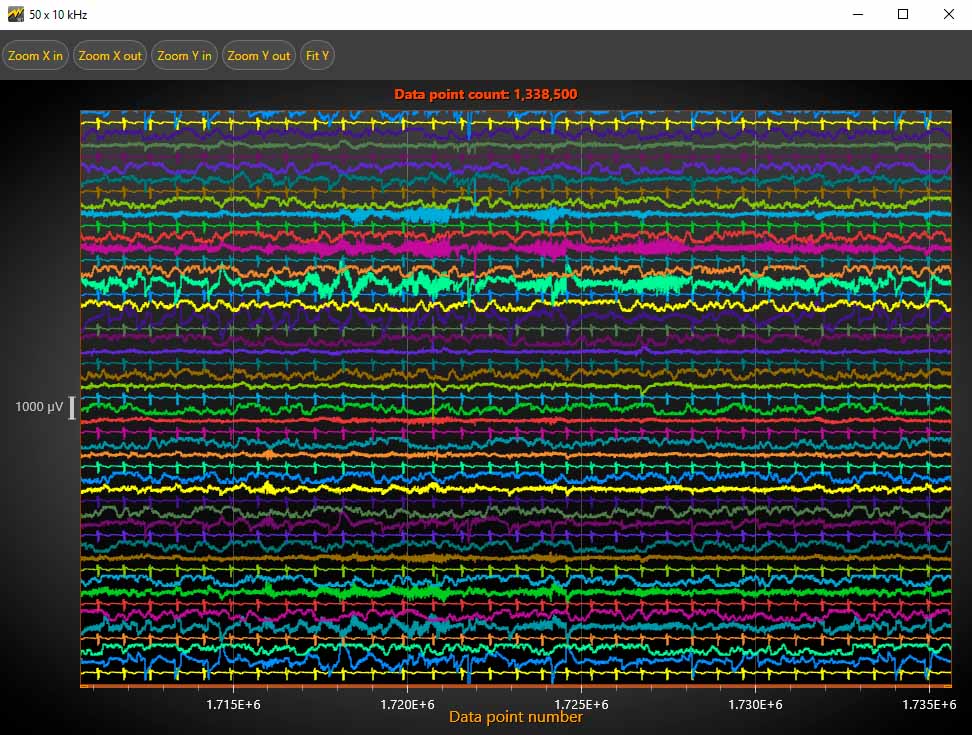 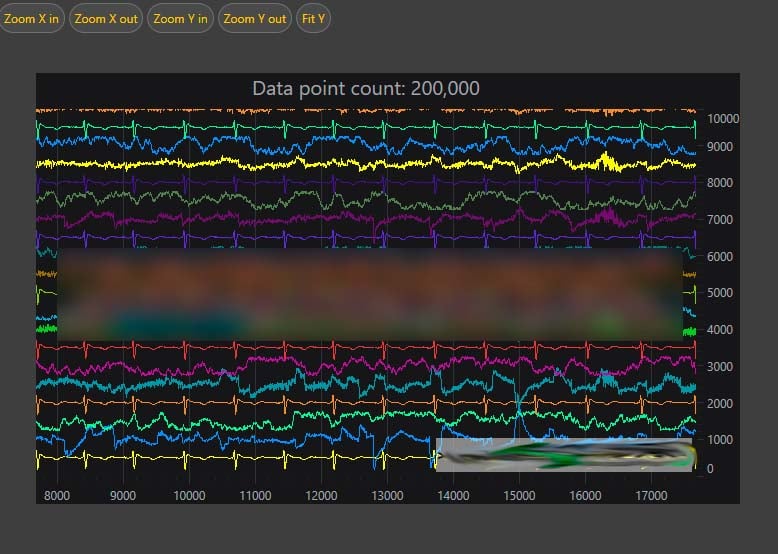 The test was performed in two modes:

refers to the chart refresh rate. A smooth scrolling requires stable 30 FPS or more, the higher value of frames/sec the better.

is measured in MB. A lower value is better.

Standard deviation of Refresh intervals measured in milliseconds. A lower value is better, and it indicates a smoother data-scrolling experience.

A standardized measure of dispersion. A lower value is better and indicates a smoother data-scrolling experience.

Demonstrates the CPU load compared to the number of frames rendered. A lower value is better.

The delay between refreshes was measured in milliseconds. A lower value is better.

In this test the charts were asked to render as fast as possible (High FPS mode). 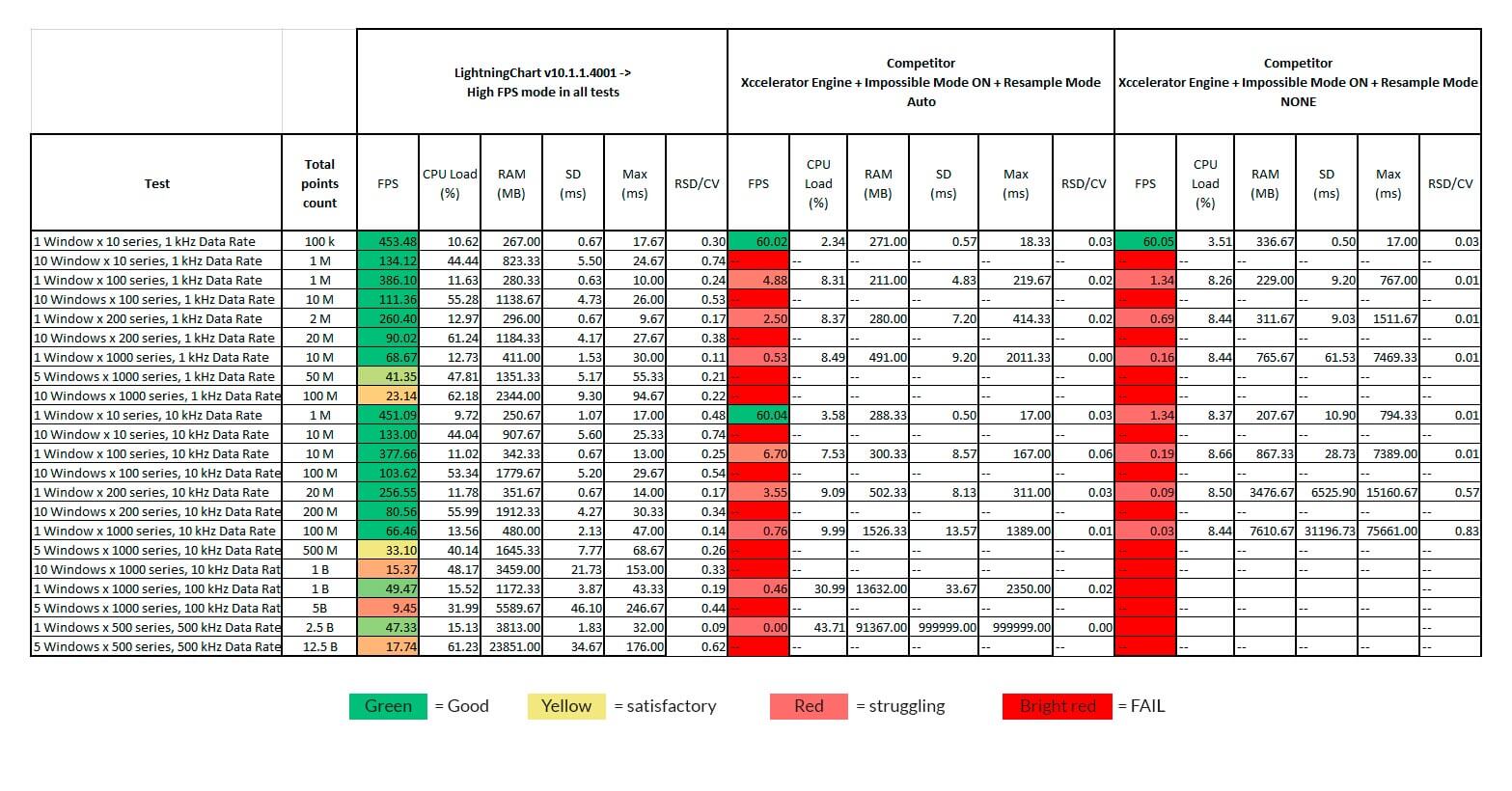 In this test, how many times faster LightningChart is? 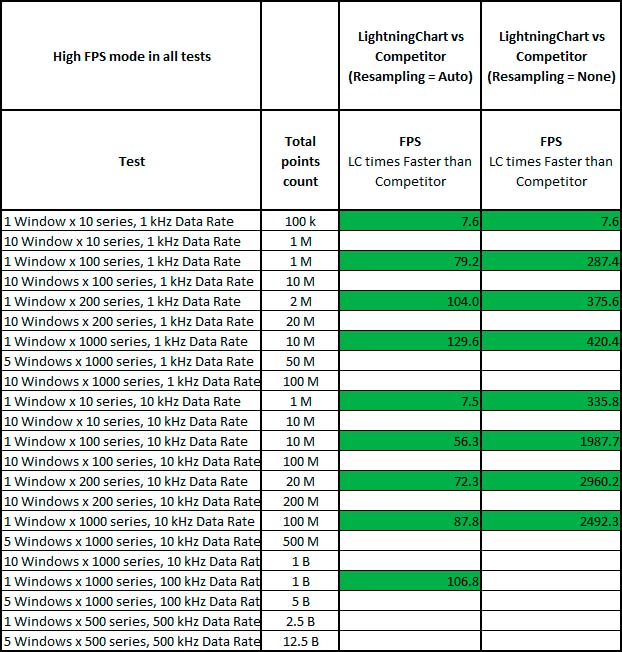 (The empty rows are due to the Competitor’s failure to produce any measurable values.)

Please see the Full Comparison Results (.pdf) to read more about the two other tests performed
in a desktop CPU saving mode device and, in a laptop with high-FPS mode.

After verifying the Competitor’s “billion points” demo, we found out that it provides highly misleading information as is purely impossible to make it render with such claimed data rates and refresh rates presented in their video.

The promotional information of the Competitor is totally misleading, and the performance claims are not achievable.

Performance Tricks of the Competitor 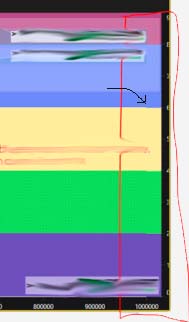 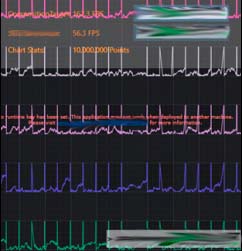 The used data contains peaks at regular intervals. Downsampling/Resampling is very coarse and it is missing peaks and producing diagonal line transitions.

Using downsampling/resampling is a trick to improve performance but it shouldn’t be used for any real application!

The FPS calculator lags behind for some time so it gives a very high FPS but even the chart cannot clearly update with such claimed data rate. Even when pushing the data in a rate the chart cannot update at all, the FPS rate shows high.

When downsampling/Resampling is disabled, the rendering goes unusable with 10 million data points and 50 million data points, 0.7 FPS is shown, and CompositionTarget shows 445.6 FPS. The chart actually cannot render even with 0.7 FPS, but 0.3 FPS or similar. 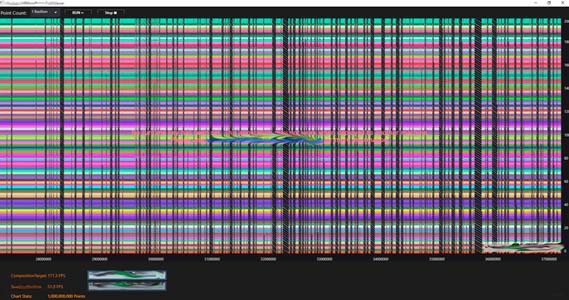 The rendering Competitor uses may save computer resources, but apparently line rendering is not working, and it is skipping data blocks. Resampling is enabled.

Conclusion of the Test

Unlike the Competitor, LightningChart’s performance is real, needing no gimmicks or tuning special flags to produce the correct rendering output. The Competitor suffers from an erroneous rendering algorithms and disadvantages produced by resampling. The Competitor doesn’t work in a multi-window solution using several dispatchers, so we couldn’t measure and compare performance in that scenario.