In 2013, LightningChart asked SciChart to participate in a WPF chart benchmark, where SciChart would have been given a chance to program or learn the best ways to get an optimal performance. Unfortunately, SciChart informed us that its license terms do not enable performance comparisons.

However, in the beginning of 2016 SciChart conducted a benchmark test where they compared SciChart v.4 (their newest version at that time) performance against LightningChart v.6.5.1. They claimed “SciChart is up to 8x faster than LightningChart”. We proved it wrong by fixing LightningChart usage in the performance comparison application.

SciChart provided the false results because of the incorrect test implementation.
Here are some reasons behind: 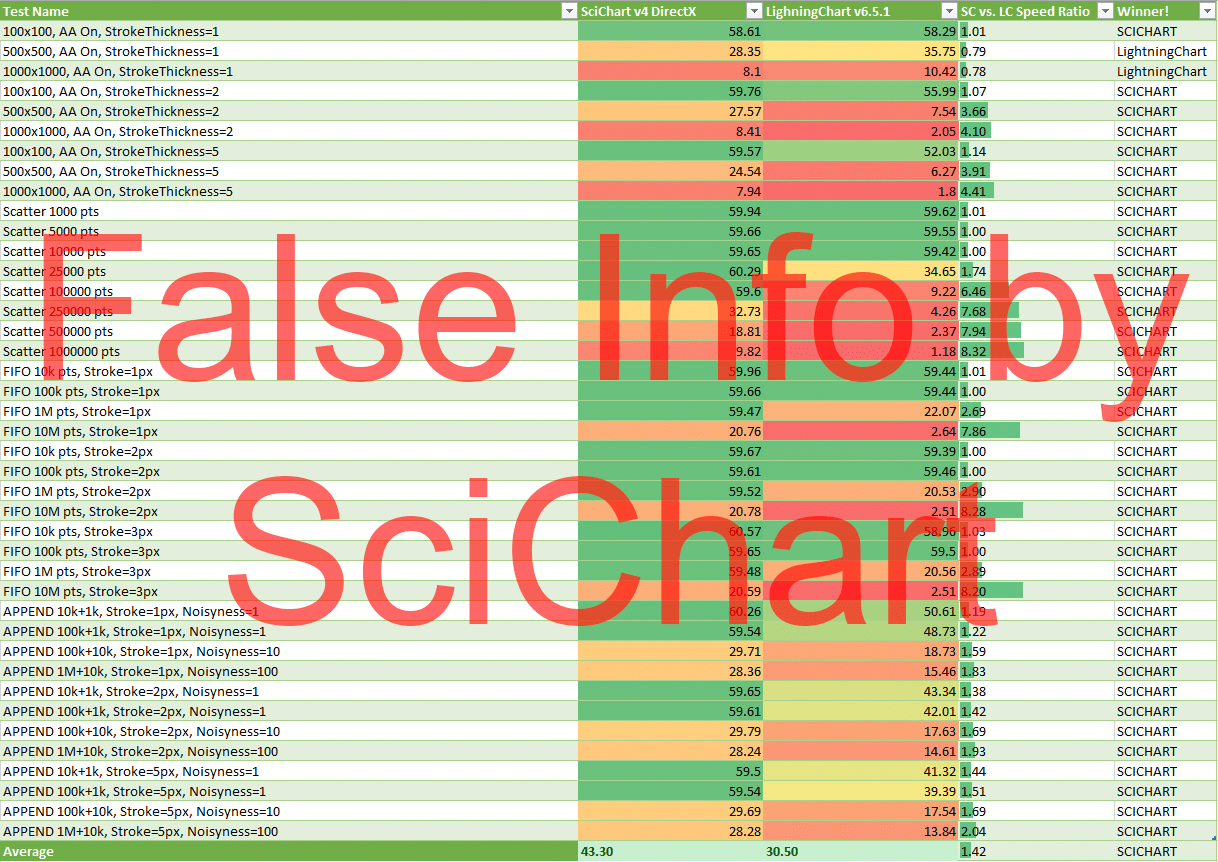 LightningChart performed the test again, so that our (and Scichart’s) customers can see the true figures and real results for their consideration. We are honest to our clients, and the testimonials show that our promises are based only on true facts and real performance capabilities.

LightningChart is faster than SciChart up to

Resampling in use for Scichart

SciChart being faster up to 5x in some tests, LightningChart is faster overall, up to 14 x faster. 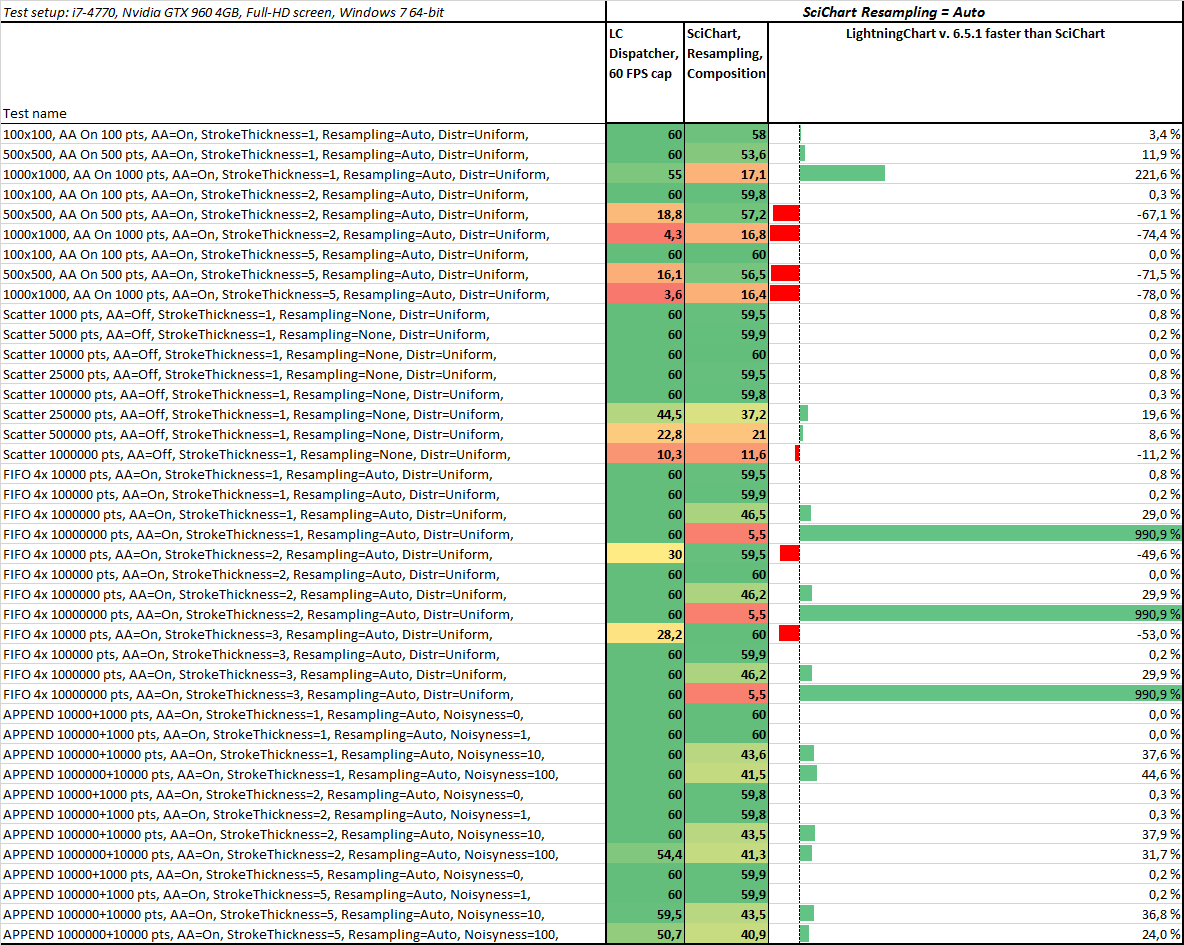 SciChart being faster up to 4x in some tests, but overall LightningChart is up to 200x faster. 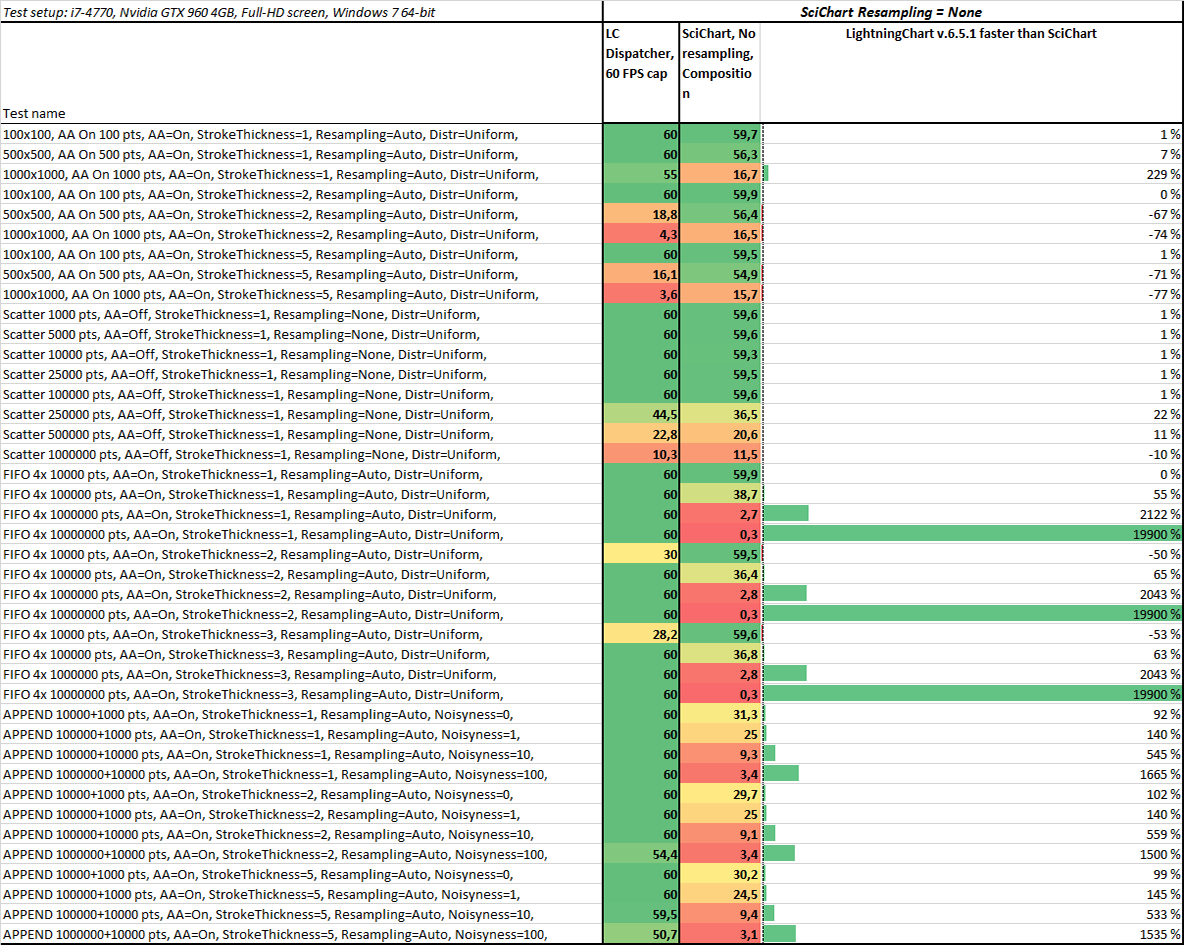 LightningChart 7 comes with new DirectX 11 rendering engine, so our team performed tests with it too.

Resampling in use for Scichart 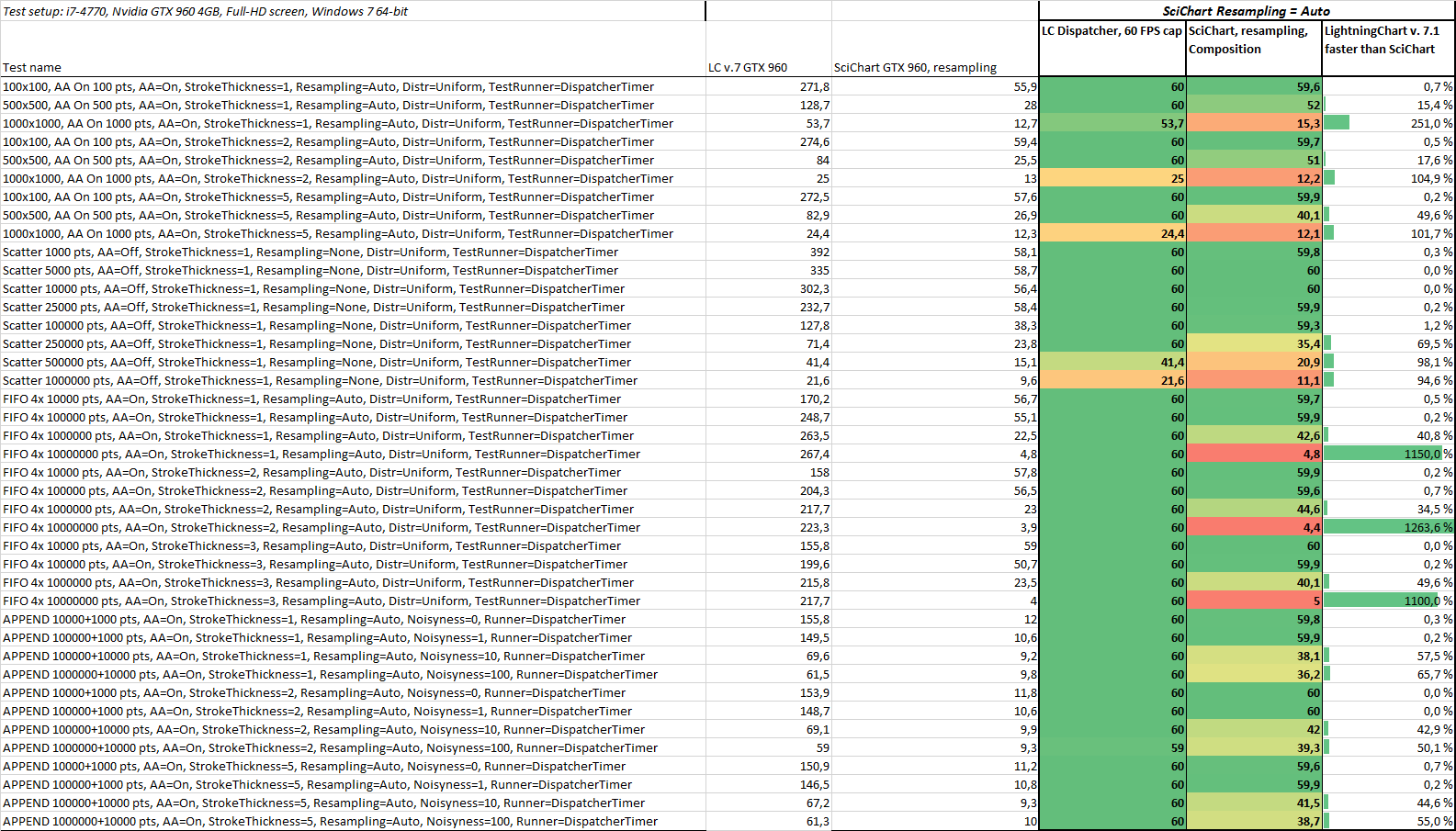 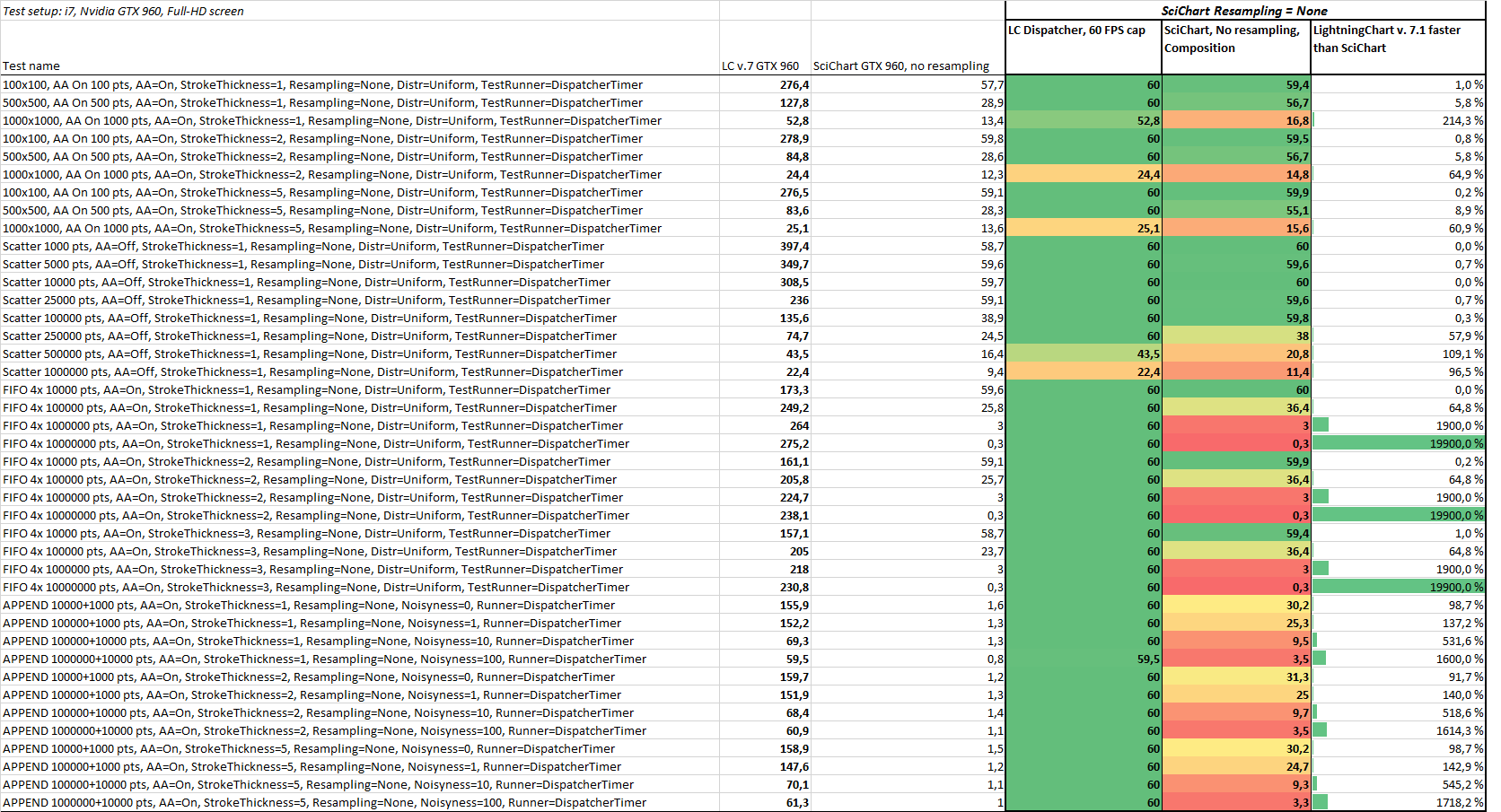 When using 8 series, LightningChart can render 8 x 125 million points with 60 FPS, while SciChart starts to slow down at 8 x 100000 points, when SciChart is using resampling. LightningChart data plotting capacity is 1250 times better in this test.

When using 8 series, LightningChart can render 8 x 125 million points with 60 FPS, while SciChart starts to slow down at 8 x 10000 points, when not using resampling. LightningChart data plotting capacity is 12500 times better in this test.

Contact Us
©LightningChart Ltd 2022. All rights reserved.
Cookies Policy
Our website uses cookies to provide you with the best user experience possible and make the navigation of our website easy and safe for our users.
In turn, we use cookies to measure and obtain statistical data about the navigation of the users. The cookies’ information is stored in your browser and performs functions that include recognizing your new and return navigations to our website.
This information helps our team understand which website sections you find the most interesting and useful.
You can configure and accept the use of the cookies and modify your consent options at any time.
Read our terms and conditions and privacy policy to learn more about how we process your data.
Powered by GDPR Cookie Compilance
Manage Settings